What is the Minimum Tax Credit?

Most of the time, triggering AMT causes a permanent increase in your taxes. You won’t get a refund for those taxes paid later on. These items are called “exclusion items”. However, there are a few cases where the AMT owed is designed to be a prepayment of tax and not a permanent increase in tax – exercising ISOs are the prime example of this so-called “deferral item”.

The minimum tax credit, or MTC, is a non-refundable tax credit created when AMT is paid on deferral items. In tax years after AMT is owed, the MTC is recovered by reducing the taxes you otherwise would owe. It could take just one year to recover your MTC, but it often takes several years, even decades. More on how the MTC works later. 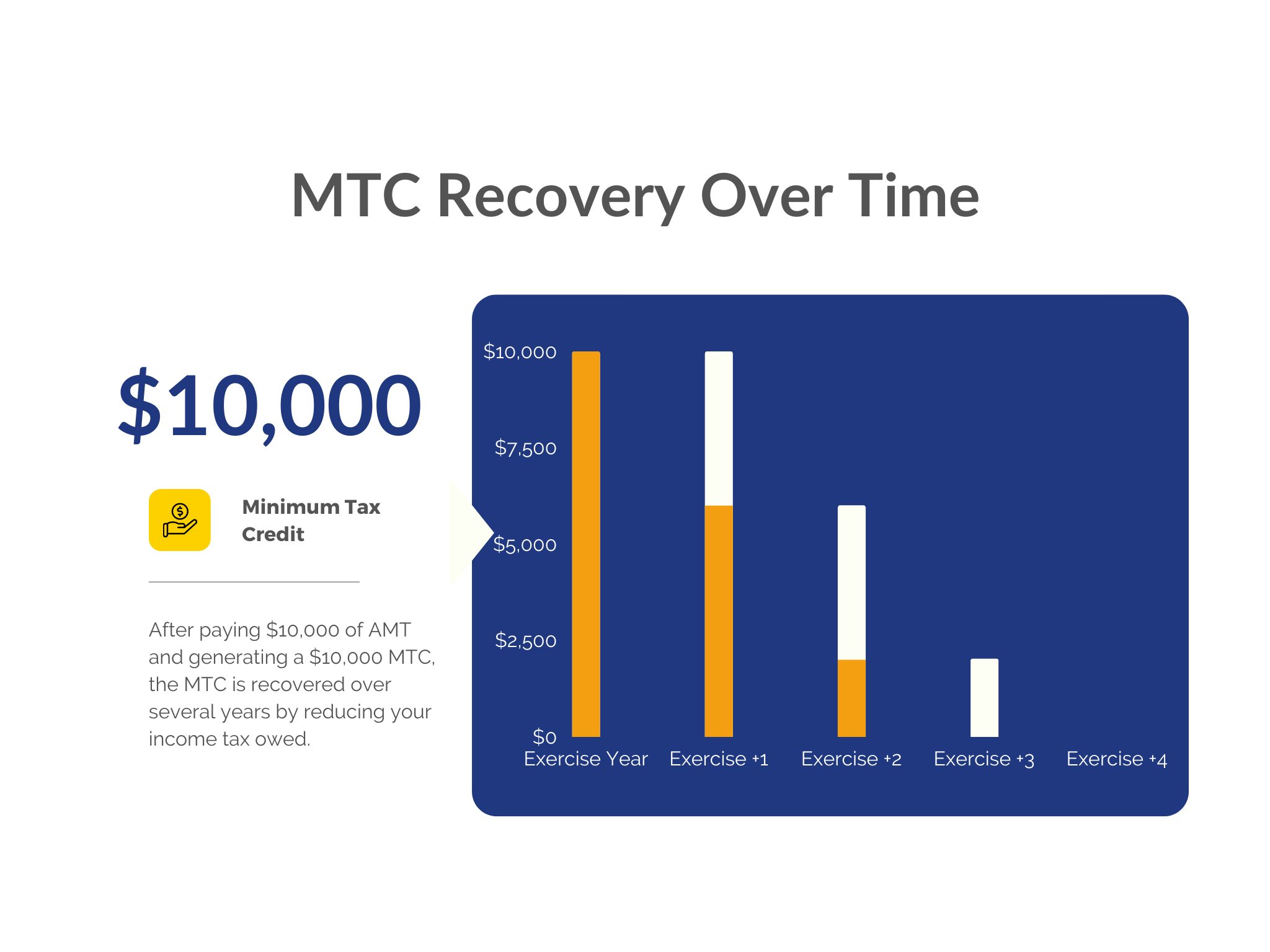 In case you're wondering if you've been missing out on this tax credit for years, don't worry. If you've never found yourself owing AMT before (that's the vast majority of taxpayers), you wouldn't have any MTC to consider.

AMT Liability vs. the Tentative Minimum Tax: A Distinction

There are two ways to refer to AMT. The first is your AMT liability: how much AMT you owe, or how much AMT has been triggered. This is the amount of tax owed on top of your regular income tax. The second is the tentative minimum tax, or TMT. As the name suggests, this is the minimum amount of tax you’re allowed to pay. The TMT is sometimes referred to as AMT as well (just used in a different way as the first definition), but to avoid confusion I’ll stick with TMT. 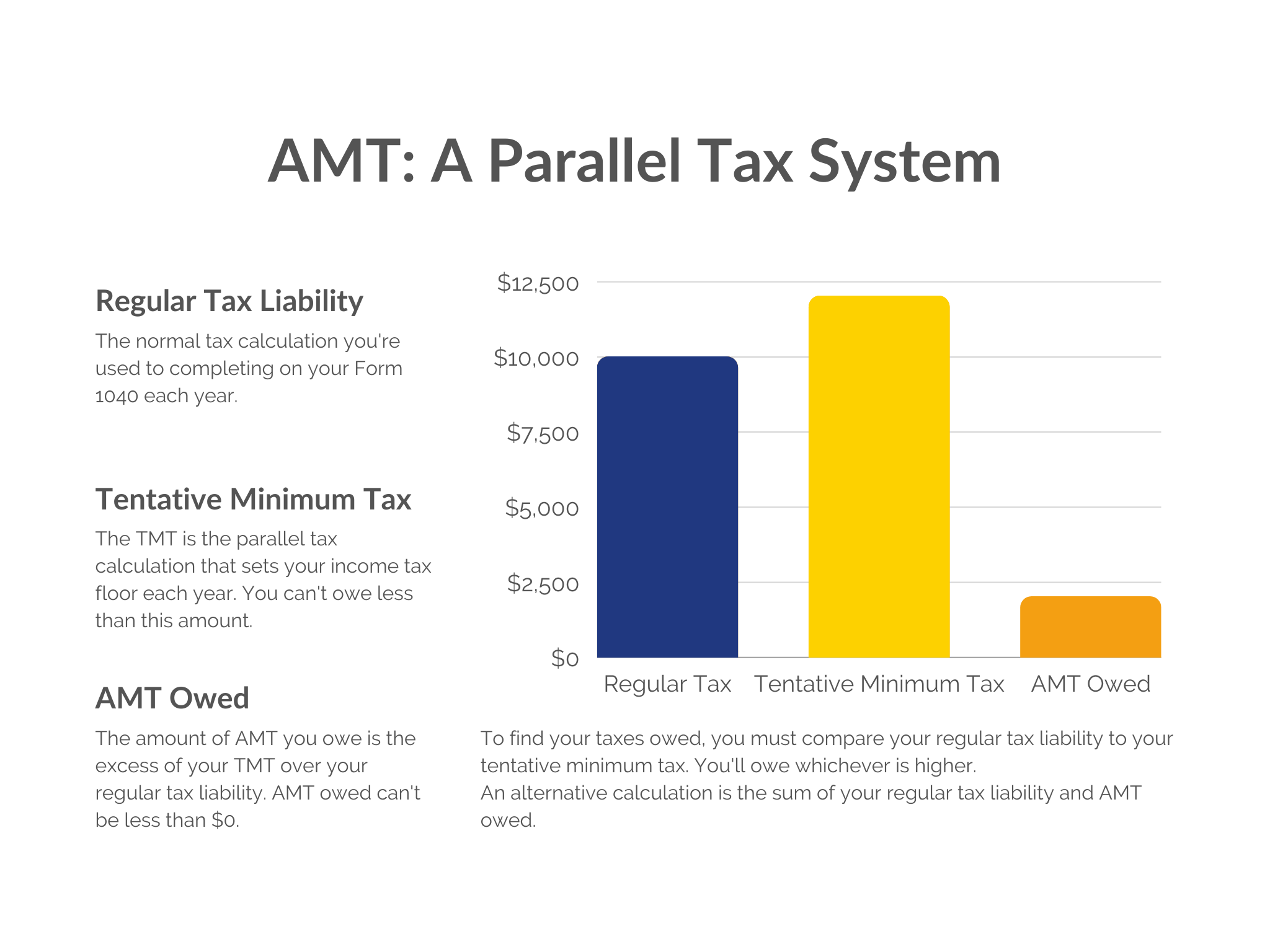 How Does the Minimum Tax Credit Work?

Once you’ve generated an MTC, the hard part is getting those prepaid taxes back. The MTC is non-refundable, which means that it can’t lower your tax bill below $0. Seems simple enough, right? Just owe no income taxes until your MTC is used up. Nope.

The MTC only reduces your regular income tax bill – it has no effect on each year’s TMT. And because TMT is the least amount of tax you’re allowed to pay each year, the MTC can only reduce your regular tax bill to the extent it exceeds TMT.

Continuing our example to next year, what if your regular tax liability is $18,000 but your TMT is also $18,000 next year? In this case, you’re unable to recover any of your remaining $4,000 MTC, and it’s carried forward to the following year. This process repeats every year until the MTC is used up.

The example above highlights a potential problem. What if your MTC is huge or you’re always close to triggering AMT? It can potentially take many years to recover that MTC, and we know from the concept of time value of money that $1,000 in 20 years is worth less than $1,000 today. That’s of course why the IRS wants to collect its taxes now and repay them over time.

What’s even worse? The research I’ve done suggests that if you die with an MTC, that credit disappears after the year of death. If you have a surviving spouse, they may have one last chance to use it up, but after that it’s gone. This is based off of a single tax court case, Vichich v. Commissioner. As you might expect, this isn’t a topic the tax court hears often.

Therefore, it's prudent to try to manage the AMT you incur and the MTC you recover each year. The less AMT you have to pay to begin with and the faster you can recover your MTC, the less overall impact it has.

Now that we’ve gotten through what the MTC is and how it works in general, it’s time to apply it to exercising and selling ISOs.

In the year of an ISO exercise, the bargain element (the FMV minus exercise price, multiplied by the number of shares exercised) is a positive adjustment to AMT. This positive adjustment is what increases the TMT calculation and ultimately creates an AMT liability and corresponding MTC.

In future tax years, the MTC is recovered by reducing the regular tax liability to the extent it exceeds the TMT or is used up.

There are two important things to note here. The first is that selling your ISO stock isn't necessarily required to recover your MTC. The next example will illustrate how the MTC can be partially recovered even without a sale. The second is that selling your ISO stock doesn't necessarily mean that you'll recover your entire MTC in that year. It helps by reducing your TMT in that year, which allows more MTC to be used up, but other financial decisions can also impact your MTC recovery.

The total taxes paid over these four years is $66,000 (the “Actual Tax Owed” column). Notice that if AMT hadn’t factored in at all, the exact same amount of taxes would have been paid (the “Regular Tax” column). The difference is in the timing: without AMT the bulk of the taxes is owed in the year of sale, but with AMT the tax burden shifts heavily to the exercise year.

I want to point out something else from the table above. Notice that the MTC recovered in 2022 (the year of sale) is significantly larger than in other years. This is because the ISO sale created that negative AMT adjustment and reduced TMT significantly. Without the negative AMT adjustment properly reported, 2022's $15,000 TMT calculation would have been much higher and closer to the regular tax calculation of $35,000, and the MTC recovered could have been significantly smaller.

The easiest way to deal with the minimum tax credit is to never trigger AMT with an ISO exercise. No AMT, no MTC, no problem. However, that’s often not realistic. When it comes to AMT and the MTC, strategically exercising and selling ISOs can have a huge impact on your tax bill year over year. Don’t make the mistake of exercising and selling ISOs arbitrarily. If this all seems overwhelming to you, let’s build your strategy together – don’t hesitate to reach out or schedule a time to talk.